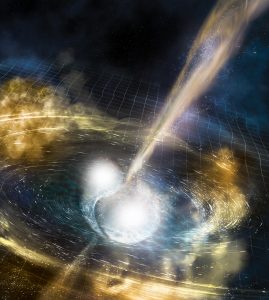 Gamma-Ray Bursts (GRBs) are some of the most energetic events observed in Nature. They typically release as much energy in just a few seconds as our Sun will throughout its entire life. They occur approximately once a day and come from random points in the sky, with a seemingly uniform distribution. They can be roughly grouped into two classes according to their temporal duration. Long GRBs (lasting longer than about 2 seconds) are understood to be caused by collapsing cores of rapidly-rotating massive stars. Short GRBs (lasting less than about 2 seconds) are thought to be emitted mostly by pairs of neutron stars merging into a single object, although a small fraction of them is thought to come from isolated magnetars, and possibly from neutron stars merging with black holes, although the latter channel is not supported by observations yet. Since both core collapses and neutron-star mergers are violent physical processes with a high chance of producing observable gravitational waves (GWs), it is valuable to perform joint searches for GRBs and GWs that originate from a common source.

Having the position and time of a GRB, it is possible to run very sensitive GW analyses that coherently combine the signals from the GW detectors taking data at the time of the event. Based on the properties of the GRBs, we either perform a simple search for a generic excess of power in the GW data (suitable, for example, for a core collapse signal), or we also include a targeted search for a signal that looks like the merger of two compact objects. So far, only one association between a GRB and a GW has been confidently observed: the neutron star merger event GW170817 associated with GRB 170817A.

Main contributions from the IJCLab group